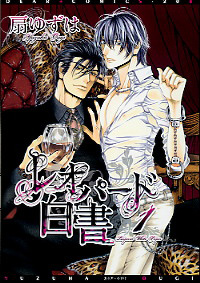 Vol.1
Aya, a popular host who works at the club, “Leopard”, is known for his good looks and his love for money. One day, a man named Shingyouji, with an aura fit to be a king, comes by and says, “I’ll buy you. How much do you want?” What awaits Aya within the next 24 hours is house-wife role playing and lots of S&M sex… A story that begins with money and body that leads to one hell of a relationship starts here! [BangAQUA]

Vol.2-3
Rinka works at the Leopard as a host. At age nineteen he’s had enough of sex, so Rinka enrolls in after-school classes to alleviate his boredom. His teacher, the bespectacled Yakushiji, may at first glance seem virginal, but Rinka finds out that he sleeps with men. When Rinka lays a hand on Yakushiji for a lark, the quiet teacher unleashes the beast within, resulting in biting kisses and a wild romp between the sheets!