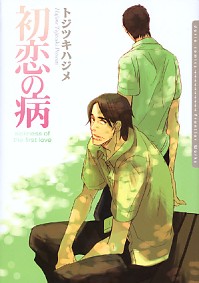 1) Sickness of the First Love
After a car accident Ayase begins to see hallucinations of his first love, Haigo who disappeared, as the young man he was. An operation is supposed to fix the problem, but doesn’t. Seeing a young Haigo during the day, and a grown-up Haigo at night, has Ayase finally gone crazy?

2) The Mystery That Began on the Train
There are two kinds of customers that Soo, as an attendant on a sleeper railway has to deal with: honeymooning couples and weirdos. Teshirogi is definitely one of the latter. The overly dramatic older man seems to be making fun of Soo, but why does he think they’ve met before?

3) Kitsune Tsuki (Fox Moon)
Tada is the heir of his family and the last fox spirit handler. As a child he saved the spirit Shiro from being abandoned, and Shiro agreed to stay till Tada was an adult. With only two years left to go, Shiro needs to reconcile his feelings for the human boy.

4) Kikusa Yayoi Zukitan
2nd year piano student Wachi is playing one day when he’s suddenly accompanied by a violin. Enter genius violinist Meguriya. When Wachi confesses to Meguriya he doesn’t receive a reply, but when two people are so aligned musically, are words really necessary?

5) A Happy Person
When Komiya disappears from school, Oosakaya is sure that Komiya will contact him. They’re dating, after all. But four years go by before a dirty and tired Komiya crawls into his bed and promptly falls asleep. He’s happy to have Komiya back, but Oosakaya can only wonder how long it will be before the person who says he loves him disappears again…

6) Speechless
A word game between two colleagues offers one a chance to make his feelings known.