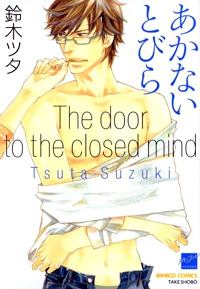 1-2) The Door to the Closed Mind
Back in college Usui ignored Masuoka, the cute kouhai who had the not-so-secret crush on him, but now he’s hired him as his assistant. Dealing with the shy Masouka isn’t too hard, however the pheromones he emits have the perverts crawling out of the woodwork! Is Usui immune, or just biding his time?

3) The Ugly Duckling and the Prince
In high school reserved Tayama paled in comparison to princely Tachibana, even the girl Tayama liked did nothing but talk about him. Now that they’re in the same college Tachibana has latched onto Tayama as his new best friend. Fighting off the Prince’s fan girls is proving to be troublesome, but more worrying are Tayama’s own feelings…

4) The Prince’s Sweetheart
Tachibana and Tayama’s story picks up viewed from Tachibana’s rather unique perspective.

5) It’s Lonely When You’re Cold
Muraoka Takeo has been admiring the beautiful but reserved store clerk for months, but when Takeo finally gets up the nerve to talk to him he finds himself being kissed! When the object of his admiration proves to be more different than Takeo could ever imagine, is there any hope?