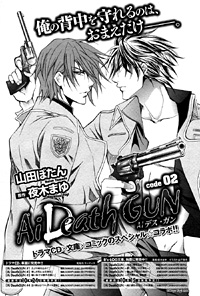 Sajimiya Reiji and Mijou Yashiki are partners who use their “Death Guns” to hunt a group of vampire-like beings known as “Artemis”, created due to a natural disaster that occurred a century prior to the events of the story.

When a group of Artemis that calls itself “Pleiades” begins to attack random humans and convert them, naive newcomer Takao Iota teams up with his two more experienced co-workers to try and hunt down the ones responsible.